The 13th Franciscan Culture Days takes place in Našice, 1-10 May 2016. The program of the event includes a series of lectures, book presentations, a concert and an academic conference on Franciscan heritage. 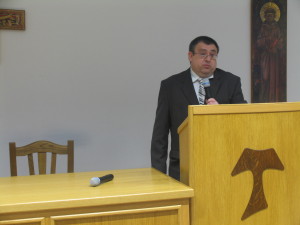 The Lecture of Dr. Dinko Župan

On May 2nd 2016 the results of the project From Proto-Modernisation to Modernisation of Croatia’s School System were presented as part of the event. Dr. Dinko Župan gave a lecture titled Being a Student in the 19th Century, thus announcing the project’s academic conference and an exhibition which are to be held in May 2017 at the Croatian Institute of History and Croatian School Museum in Zagreb. Dr. Milan Vrbanus presented the project’s results, especially the databases on Croatian students at the higher schools in the Habsburg Monarchy and on teachers and professors of Croatia-Slavonia, the search of which is available as of May 1st 2016.